Tony has been coaching both swim and water polo for over 10 years. He coached at the high school level for 9 years, the last 5 at San Ramon Valley High where he led the Wolves to a 2nd place finish in the North Coast Section. As the SRV boy’s coach, he was named the ContraCosta Times Coach of the Year. At the club level, Tony started at East Bay Water Polo before it merged and became 680 Water Polo. Tony has had the opportunity to coach on both the boys and girls side. Some of his team’s highlights are 3 rd place in the Junior Olympics with the 12u girls in the Platinum Division, 2 nd place at JO’s with the 18u girls in 2018, and most recently he helped guide the 18u girls to the National Championship this past summer in the Platinum Division.

Tony is a Special Education Teacher at San Ramon Valley and is married to Stephanie.

They have three children (Sammi, Sophie, and Nick) who have all played or are still playing with 680! 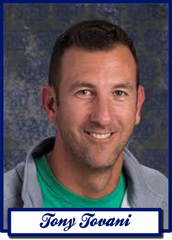