Steve Carrera is currently the Head Women’s Water Polo Coach at the College of Marin. Steve has been charged with starting the College of Marin’s women’s water polo program. In 2019, Coach Steve led the Orange Lutheran GWP program to a trinity league championship, a CIF-SS D1 Semi-Final appearance and the 2019 CIF State Championship. In that same year, the Olu boys water polo team won the trinity league championship and was ranked in the top 8 for the majority of the season. Steve was named SOPAC Zone distinguished coach after leading the North Irvine 12 and Under team to a bronze medal in the 2019 Junior Olympics, a gold medal in the US Club Championships and a gold medal in the Cal Cup State Championship.

Prior to coming to OLu he was the Head Men's and Women's water polo coach at Concordia University. In 2007, Steve was hired to start the first water polo program in Concordia's history. His stint at Concordia was very impressive going 109 - 48 on the Men's side and 65 - 58 on the Women's. The Concordia men were ranked as high as 8th in 2009 and as high as 6th in the Country in 2011. Steve coached over 30 Academic All Americans and 11 All- Americans during his time at CUI. Concordia won the NAIA championship 3 times in a row on the men's side and were runners up 4 times on the women's side. Steve was interviewed by Water Polo Planet noting the unprecedented success of the Concordia Water Polo team into top National ranks.

Before arriving at Concordia, Steve was the head boys and girls coach at Northwood High School (2000-2007). During his tenure at Northwood, the Timberwolves went from brand new program to CIF powerhouse. Under Steve Carrera, the Timberwolves never had a losing record, won a pair of league titles (2003, 2006), qualified for CIF 6 years in a row, reached the Division I Final (06) and won the 2006 CIF Masters Southern Section Championship (06). Steve coached All-League, All-County, All American and All CIF water polo players on both the boys and girls side and in 2006, Steve Carrera was named "Coach of the Year" from the Orange County Register.

Steve graduated from Irvine High School in 1995 where he received first-team all-Sea View League honors and second-team all-CIF honors as a senior. He was also named to the South Orange County All-Star Team. He then went to Saddleback College where he played with his brother, Ed Carrera. After Saddleback, Steve transferred to Queens College in NYC, where he received a full athletic scholarship to play water polo and swim. He was on the inaugural Premier League Division I Northeast team.

Steve earned his Masters degree in Education in 2011 and a Masters in Physical Education in 2014. He is a full time Kinesiology Instructor and Head Swimming and Women’s Water Polo Coach at the College of Marin. He lives in Mill Valley, CA with his wife and four kids. 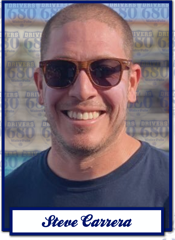