Eddie Lee attended De La Salle High School in Concord where he swam and played water polo for four years.   He was a high school All American breaststroker.   He then attended Cal Poly San Luis Obispo and Cuesta College where he earned All American Honors in breaststroke as well.

Eddie has been coaching swimming and water polo in the area for more than 20 years.   He has a lot of experience coaching high school, community college, rec, and club swimming and water polo.  He has been the Head Coach/Director of Miramonte Swim Club for the last ten years.  Prior to that, he was the Head Coach of Valley Vista and Forest Hills Swim Teams for around ten years.   In his many years coaching high school, he led Northgate High to several top three NCS finishes in boys and girls swimming and water polo.  He was also awarded the 2005 NCS Coach of the Year for girls water polo.  Last summer, he head-coached and led a 10u Girls Water Polo Team to win the Junior Olympic Gold Medal.  He has a passion for coaching athletes and is excited to be part of the 680 coaching staff.   Eddie teaches middle school math, and when he is not teaching/coaching, he enjoys spending time with his wife and two daughters. 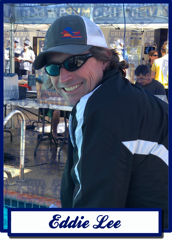